Combination therapies are being increasingly employed to treat diseases where single agents do not have the desired clinical benefit. Acute myeloid leukemia (AML) is a malignant disease characterized by rapid growth of myeloid cells in BM. This year, 14,500 new cases will be diagnosed in the US, while claiming the lives of approximately 10,000. Nearly 40 years have passed since the development and implementation of cytarabine (Ara-C) and daunorubicin (DNR) combination therapy as a standard of care. However, in clinical trials additional drugs have been introduced as novel treatment regimes, either alone or in combination with standard treatments. A relevent ex vivo  assay that reflects the potential of novel treatments may facilitate the discovery of more useful drug candidates. Flow cytometric and CFC assays provide ex vivo platforms in which the diversity of the disease parameters as well asthe utility of novel compounds can be tested. To this end we used eight color flow cytometric analysis to determine the cellular phenotypes of AML and NBM. Using the CFC assays, we evaluated the effects of drug combinations on NBM progenitors and AML CFU-L.

Eight color flow cytometric analysis was used to analyze mononuclear cells from nine AML BM and six NBM donors with Becton Dickinson LSR II and analyzed using Kaluza®. The list of flurochromes is provided in Table 1. Using CFC assays evaluated the toxicity of AML drugs, DNR, Ara-C, clofarabine and sorafenib on AML “cancer stem cells” and NBM. A panel of AML patient marrow samples were analyzed and compared to a panel of normal donor marrow in CFC assays (Table 2). Bone marrow cells from either AML or normal donors were mixed with the compounds at an extended concentration range in ColonyGel™ 1102 and plated in 35 mm dishes (3 replicates per concentration). The cultures were incubated on a humidified incubator at 37°C, 5% CO2. CFU-GM or CFU-L (AML-Blast like CFC) were enumerated on day 14 and IC50 values were determined. For CFU-L , IC25 values were also determined. Based on these IC25 values,standard combination treatment of Ara-C/DNR were compared to treatment regimens with additional concentrations of clofarabine or sorafenib in these ex vivo assays.

TABLE 3: Prevalence of Antigens in NBM and AML Blasts 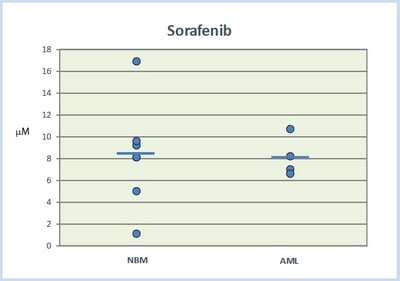 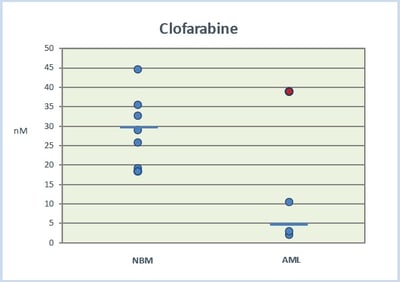 There was no appreciable difference in the IC50  in response to sorafenib. However there were significant differences (p=0.0008) in IC50 values between NBM CFU-GM and AML CFU-L. One AML Patient (colored in red above) had a very different response (>2 SD from the mean IC50 value from the group) to clofarabine. The same patient also demonstrated as unusual response to other drugs.

The combination therapy of Ara-C and DNR had a greater inhibitory effect on the AML CFU-L as compared to NMB CFU-GM. The addition of sorafenib significantly enhanced the killing of  both CFU-L and CFU-GM, whereas clofarabine had a selective inhibitory effect on CFU-L but not CFU-GM.

TABLE 5: Percent Inhibition of CFU-GM and CFU-L with Single Agents and Combination Therapy