Kinase inhibitors (KIs) represent a new class of rationally designed drugs. The success of Imatinib, targeting the ABL tyrosine kinase in CML, has prompted the development of other KIs for the treatment of various cancers and inflammation. Although more successful than conventional therapies, myelotoxicity is often a major side effect of KIs. We previously showed that there was a direct correlation (R2 = 0.81) between the in vitro human CFU-GM IC50 values for various KIs and clinical neutropenia. Interestingly, studies have revealed significant differences between human, dog, rat and mouse CFU-GM sensitivities to certain pharmaceuticals. Since multiple animal models are often used in toxicity testing, we have now compared the IC50 values between human, non-human primate, dog, rat and mouse for Imatinib, Erlotinib, Dasatinib, Sorafenib and Sunitinib.

Based on our previous data set generated using human bone marrow (Figure 1), five KIs were selected for testing: Imatinib, Erlotinib, Dasatinib, Sorafenib and Sunitinib. These KIs have different target and disease specifications (Table 1) and also have reported differences in their clinical toxicity profiles. Clonogenic progenitor assays of the human, non-human primate, dog, rat and mouse myeloid (CFU-GM) lineage were set up in ColonyGEL® methylcellulose-based media formulations optimized for each species with appropriate species-specific cytokines (ReachBio, WA). The KIs were added to the various media formulations to give final concentrations ranging from 100 to 0.0001 µM. Solvent control cultures were also initiated. The cultures were set up in triplicate 35 mm dishes with cells derived from normal human bone marrow (3 x 104 / culture), non-human primate bone marrow from both rhesus and macaque (3 x 104 / culture), dog bone marrow (2 x 105 /culture), rat femoral bone marrow (5 x 104 /culture) and mouse femoral bone marrow (2 x 104 /culture). The experiment was set up using cells from 3 individual donors/ species. Following incubation at 37° C, 5% CO2, for 7-16 days (depending on the species), the colonies were assessed and scored by trained personnel and IC50 values were determined for each drug for each species. Representative photos of the CFU-GM derived colonies of each species are presented in Figure 3. 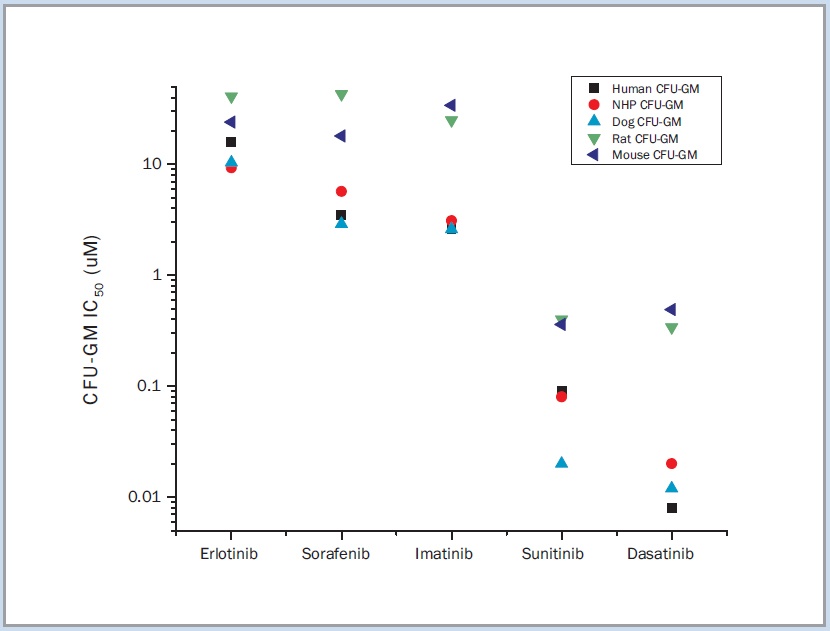 The IC50 values of the five KIs tested in the non-human primate and dog marrow CFU-GM assays compared well with human CFU-GM IC50 values. The rank order of the compounds in terms of toxicity (as measured by the CFU-GM IC50 value) was the same for human, non-human primate and dog, and corresponded with their rankings in terms of human clinical myelotoxic potential. The IC50 values for the KIs in mouse and rat CFU-GM assays differed significantly from those obtained in human CFU-GM assays with values greater than a log difference for Imatinib and Dasatinib. The rank order of toxicity of the KIs in mouse and rat CFU-GM assays was different to their order in the human CFU-GM assay and in the clinic. It is possible that data generated from rat and mouse assays for KIs may not as accurately predict the toxicity of these compounds on the human hematopoietic system as data from human, non-human primate or dog assays.