Thrombocytopenia is an on-going problem in drug development. Small animal in vivo models, which are commonly used to assess thrombocytopenia risk at the development stage, often do not translate well into non-human primate (NHP) models and human clinical trials. To address the need for a more predictive, quantitative and clinically relevant means of assessing thrombocytopenia risk at the development stage, we set out to develop primary cell based assays that could allow for the evaluation of thrombocytopenia risk in both NHPs and humans in a manner that is both biologically relevant and that allows for insight into the biological mechanism of the toxicity. In this poster, we describe three ex vivo primary cell based assays that can be used to assess the risk of thrombocytopenia in both NHPs and humans. The assays, which use primary bone marrow cells cultured under conditions that mimic the in vivo microenvironment, allow for quantitative readouts. When combined, the assays can allow for the assessment of toxic effects on cells ranging from CD34+ bone marrow progenitors through to mature platelets. Since the assays are performed in vitro, they allow for better control of experimental conditions and are more amenable to downstream proteomic, genomic and epigenetic analysis.

The goal of this work is to create assays that can accurately predict the risk of thrombocytopenia associated with investigational biotherapeutics. To be considered predictive, the assay should, as a starting point, recapitulate in vitro the known in vivo biology of thrombopoiesis in that megakaryocytes and platelets should develop from progenitor cells in a manner that is biologically relevant, reproducible and quantitative.The assays must be suitable for routine use in a biotherapeutics development program, must allow for meaningful comparisons between test and control articles, and ideally should correlate with in vivo results in NHPs and humans.

In order to evaluate the performance of the assay, we assessed four therapeutic compounds representing four distinct compound classes: (a) 5-Fluorouracil, an antineoplastic, (b) Abexinostat, an HDAC inhibitor, (c) Lenalidomide, a thalidomidederived immunomodulator and (d) Anagrelide, a phosphodiesterase inhibitor.

Four drugs from different classes were selected for testing in the megakaryocyte-based platform based on reported potential thombocytopenia effects. Bone marrow mononuclear cells from normal human donors (n=3, ReachBio, Seattle, WA) and NHP donors (n=2, AllCells, Alameda, CA) were mixed with the compounds over an extended concentration range in MegaCult™, a collagen based medium (StemCell Technologies, Vancouver BC) and plated in 35 mm dishes (three replicates per concentration). The cultures were incubated in a humidified incubator at 37oC, 5% CO2. CFU-Mk were enumerated on day 14, following fixation and staining for CD41, and IC50 values were determined for each drug.

CD34+ cell populations derived from normal human bone marrow (NorCal Biologics, Placerville, CA) and NHP (fresh marrow received from the NIH Primate Center, University of Washington and processed at ReachBio) were cultured in X-Vivo15 containing stem cell factor and thrombopoietin in a 96 well format over a 14 day period in the presence and absence of two concentrations of each of the four drugs. At various times, a cocktail of antibodies containing DAPI, CD34-PE and CD41-FITC (Beckman-Coulter, Hebron, KY) were used to stain the cultured cells. Flow cytometry analysis was then performed using a BD LSR-2 flow cytometer. Additionally, a replicate well from the same experiment was mixed and a sample removed for platelet analyses. The cells were incubated with a 1% ammonium oxalate solution and counted manually using a hemacytometer. 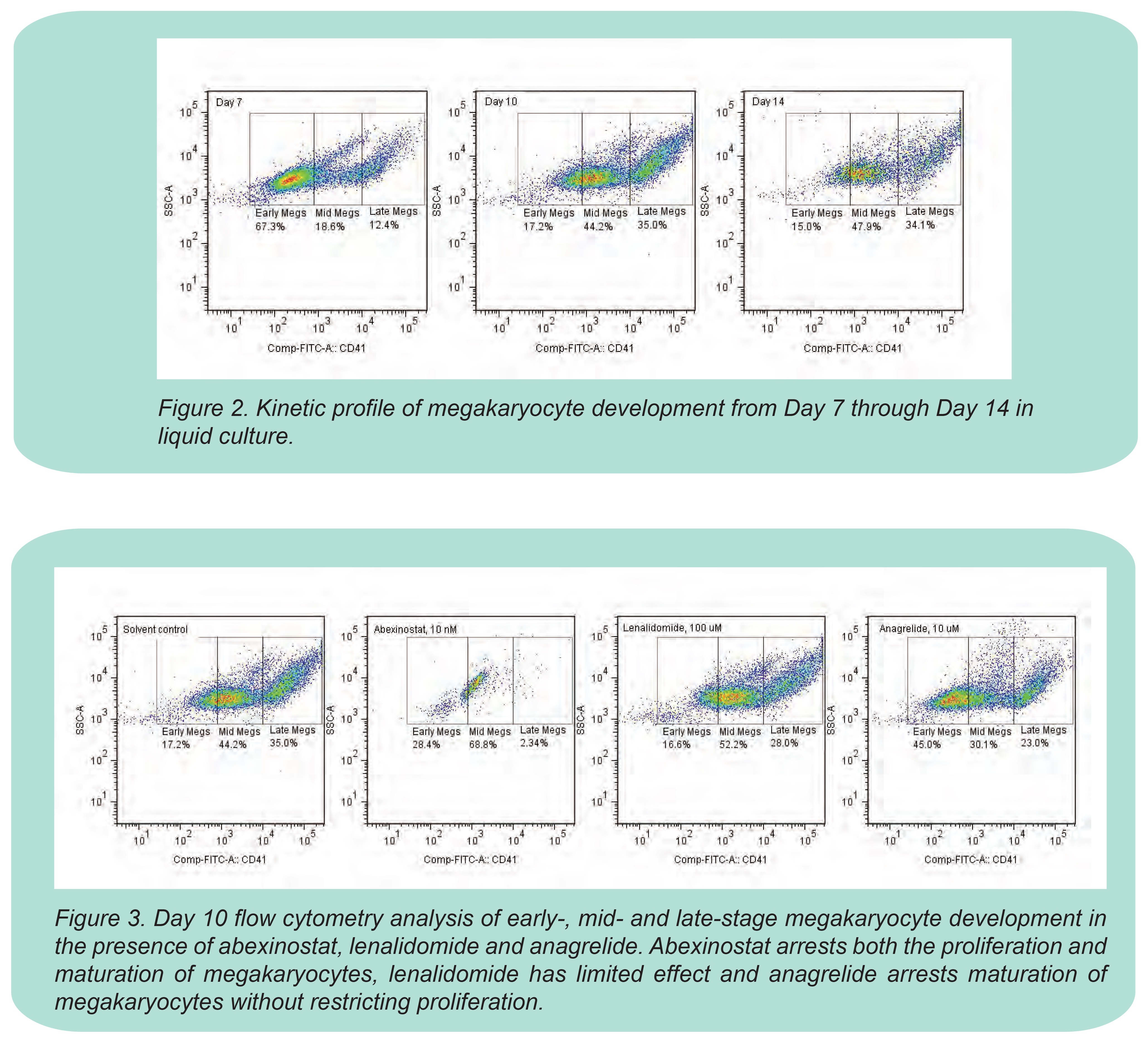 Culturing CD34+ cells in the presence of Tpo and SCF supports platelet development over a 14 day period. Platelets are initially detected as early as day 7 and continue to increase over the next 7 days. The generation of platelets from CD34+ cells is donor dependent (Figure 3) and does not correlate with the starting purity of CD34+ cells.

5-FU caused a signficant decrease of CFU-Mk, and at 1.0 and 0.3 µg/mL, only the more mature progenitors were evident in the cultures. At 1.0 µg/mL, 5-FU also affect platelet production and this seemed more pronounced in the human than in the NHP model (Table 3).

Lenalidomide had limited effects on the proliferative and differential potential of CD34+ cells towards megakaryocytes (Table 2), but decreased platelet counts at day 14 as compared to solvent control cultures (Table 3). Anagrelide appeared to arrest cells in the early megakaryocyte stage (Table 2) and, at 35 µM, caused a reduction in platelet counts in the human platform (Table 3). 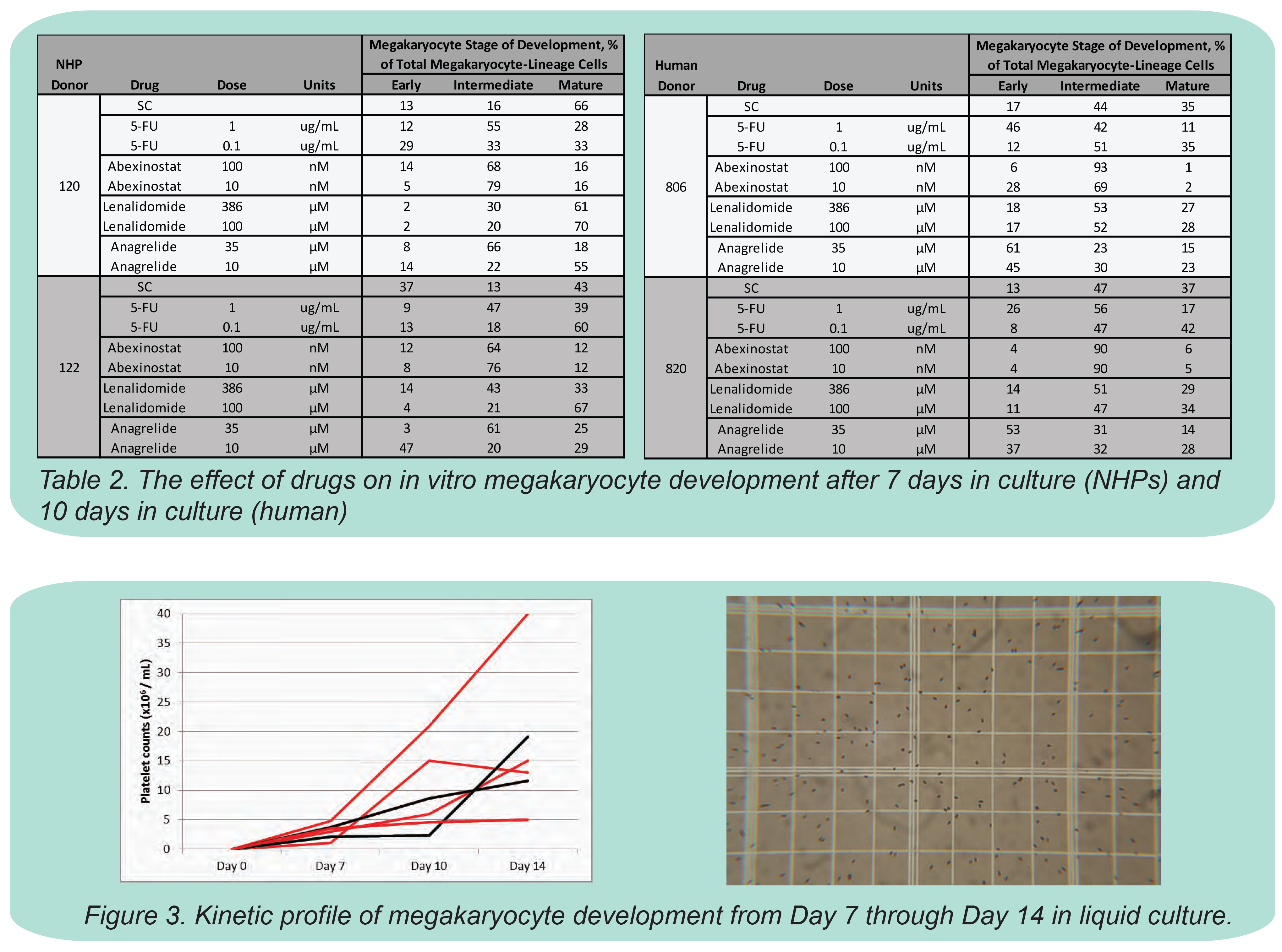 Assays that can evaluate drugs at the various stages of platelet development facilitate an understanding of the mechanism of thrombocytopenia. CFU-Mk assays evaluate the effect of compound on primitive progenitors and these have been useful in predicting thrombocytopenia (Pessina et al, 2009).

CD34+ derived cells from both NHP and human donors can be cultured and platelet assessments made after 7 days in culture. The optimal time for assessing platelets is Day 14. There appears to be donor variability in the numbers of platelets generated and to date, this has not correlated with the age of the donor or the starting CD34+ cell purity.