Thrombocytopenia and anemia are on-going problems in drug development. Small animal in vivo models, which are commonly used to assess thrombocytopenia and anemia risk at the development stage, often do not translate well into clinical trials. Although progenitor assays, measuring the primitive cells in the bone marrow are excellent at assessing toxicity with some drug classes, it appears that some of these primitive cell populations may be “spared” by the drugs, whereas their progeny – the more mature cells in the blood system- are more susceptible to the toxic effects. We have previously shared data on a megakaryocyte platform that assesses the proliferation and differentiation of cells from early progenitors to mature platelets based on CD41 expression (SOT 2015). This study extends our findings to the erythroid lineage, looking at red blood cell development from primitive CD34+ cells to mature red blood cells. Additionally, we evaluated a method to expand progenitor cells using an aryl hydrolase antagonist, which could provide suitable cell numbers for drug screening using these platforms, and assessed whether the phenotypic profiles of the expanded cells over the course of the study were similar to their non-expanded counterparts.

The initial goal of this work was to create assays that can accurately predict the risk of severe anemia associated with investigational biotherapeutics. To be considered predictive, the assay should, as a starting point, recapitulate in vitro the known in vivo biology of red blood cell development in a biologically relevant, reproducible and quantitative method. An additional goal was to assess the expansion of multipotent hematopoietic progenitor cells using an aryl hydrolase (AhR) antagonist, and to compare the kinetic proliferation and differentiation profiles of the megakaryocytes and platelets in these populations as compared to their non-expanded counterparts.

CD34+ cell populations derived from normal human bone marrow (NorCal Biologics, Placerville, CA) and processed at ReachBio were cultured in medium containing SCF, IL-3 and EPO (added initially or 7 days later) in a 96 well format over a 21 day period in the presence and absence of AZT (10 µM), Imatinib (1.0 µM) and dexamethasone (1.0 µM). At various times, a cocktail of antibodies containing DAPI, CD34, CD45 and CD235a (glyA), (Beckman-Coulter, Brea, CA) were used to stain the cultured cells. Flow cytometry analysis was then performed using a cytoFLEX® flow cytometer. Additionally, these drugs were added to a methylcellulose based medium known to support erythroid and myeloid progenitors to assess clonal growth, and plated in 35 mm dishes. The cultures were incubated for 14 days and then scored microscopically.

Two lots of bone marrow CD34+ cells and 2 lots of cord blood CD34+ cells were expanded in the presence of an aryl hydrolase antagonist (Fares, 2014). On day 7, the cells were counted and assessed for CD34+ expression by flow cytometry. A sample of cells (50,000 /mL) were replated into the complete medium and the process of cell counting and FACS analyses performed again on day 14.

The expanded bone marrow cells were set up in our megakaryocyte platform assay as described previously (SOT 2015). On days 7 and 10 a cocktail of antibodies containing DAPI, CD34- PE and CD41-FITC (Beckman-Coulter, Brea, CA) were used to stain the cultured cells. Flow cytometry analysis was then performed using a cytoFLEX® flow cytometer. 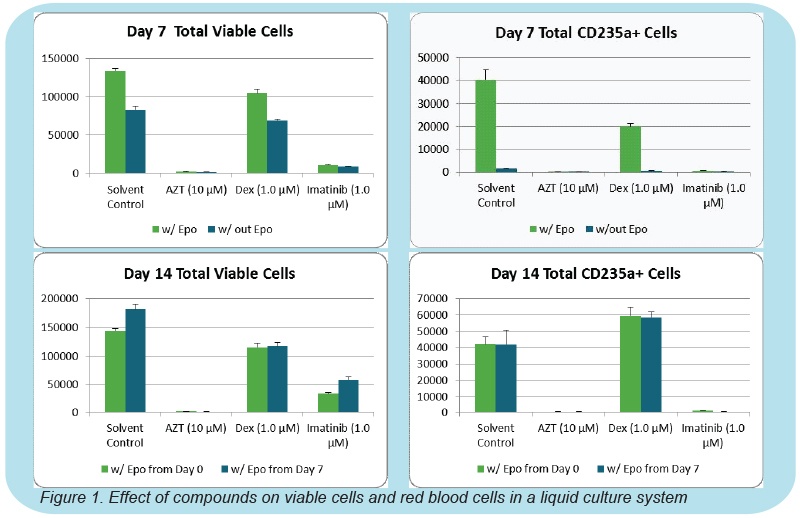 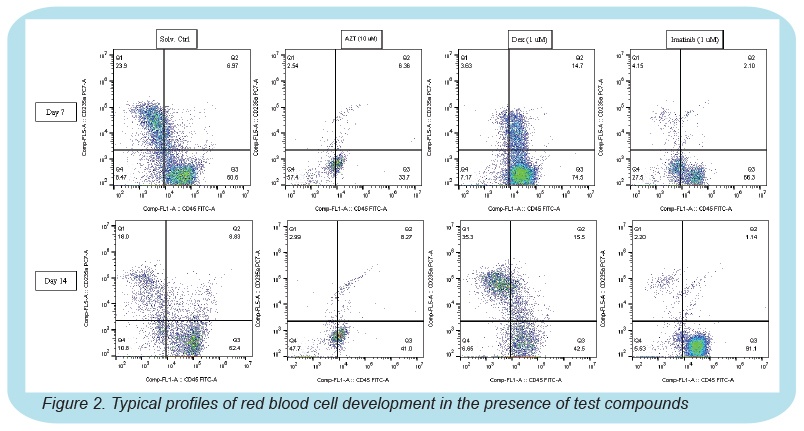 Both cord blood and bone marrow CD34+ cells expanded in the presence of an AhR antagonist, with significantly higher CD34+ cell percentages at days 7 and 14 as compared to traditional expansion methods with cytokines in the absence of an AhR antagonist. There appeared to be an inverse relationship between the expansion rate and the percentage of CD34+ cells at 14 days (Table 2). We compared the profile of megakaryocyte development on day 7 between unexpanded CD34+ bone marrow cells and those expanded with an AhR antagonist (Figure 4). The relative percentages of the early, mid and late megakaryocytes as determined by CD41 expression differed between the expanded and non-expanded cell populations, with the expanded cells having less differentiation to mature megakaryocytes (Figure 4). We performed a similar comparative study looking at red blood cell development from non-expanded and AhR-expanded CD34+ cells. Once again, the relative percentages of mature red blood cells differed between non-expanded and expanded CD34+ cells (Figure 4). 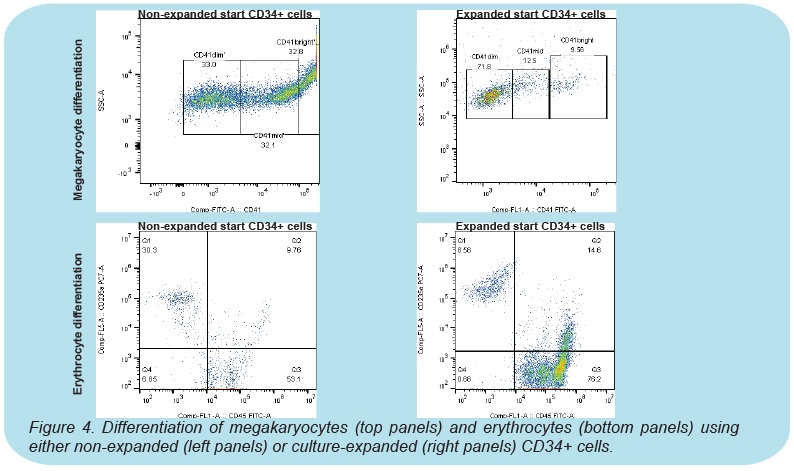