Drug induced lymphopenia may be the result of drug effects on various stages of lymphocyte maturation, including toxicity to primitive precursors in the bone marrow or on the functional mature cell populations. Differences in toxicities between animal models and humans have been observed and these can cause some concerns when working from in vivo studies and translating the data for clinical trials. Acute and reversible toxicity may suggest a more mature cell population is being affected. The publication by Morris et. al. (2010), confirmed that some MAPK kinase inhibitors may have selective toxicity to lymphoid cells in dogs, but not in mouse, rat or cynologous monkey (cyno) models. We developed a flow cytometric-based assay platform which can assess drug effects on mature lymphoid (T and B) cells from multiple species, including humans.

The initial goal of this work is to create assays that can accurately detect the risk of severe lymphotoxicity associated with investigational compounds. To be considered predictive, the assay should, as a starting point, recapitulate in vitro the known in vivo biology of lymphocytes in a biologically relevant, reproducible and quantitative method. The second objective is to compare the performance of frozen, thawed PBMCs to freshly prepared mononuclear cells.

Freshly isolated and heparinized human and NHP bloods were obtained from multiple donors. For each sample, the volume of blood was measured, diluted 1:1 with PBS + 2%FBS and layered over a Lymphoprep solution to generate a mononuclear cell population. The cells were brought to a concentration of 5.56 x 105 cells per mL in RPMI+10% FBS so that, when added to the wells in a volume of 180 µL, a total of 1 x 105 cells were present per well.

Freshly isolated and heparinized canine and rat bloods were also obtained from multiple donors (SNBL USA). Canine blood was processed using the same method as the human blood. For Rat, PBMCs could not be prepared using Lymphoprep due to the relatively higher density of rat lymphocytes. Instead, the blood was lysed with ammonium chloride for 10 minutes on ice and then washed twice with PBS+2%FBS. Cells were suspended in RPMI+10%FBS and counted manually. The cells were then brought to a concentration of 3 x 105 to 4.875 x 105 cells per mL in RPMI+10%FBS depending on the total number of available cells so that, when added to the wells in a volume of 180 µL, a total of 0.54 x 105 to 0.88 x 105 cells were present per well. Due to the very low volume of blood in a mouse, spleen cells were used to generate mononuclear cells.

We selected a moderately selective MAPK kinase inhibitor (Losmapimob) and a highly selective inhibitor (VX-702) and assessed T and B cell apoptosis following 24 hour exposure to the test compounds. Staurosporin, which triggers apoptosis in all lymphoid populations in all species was used as the positive control. The cells were then stained with species-specific antibodies against T and B cells. Annexin V was included in all tests to assess apoptosis induction. The samples were assessed on a 13 color CytoFlex flow cytometer (Beckman Coulter), and a minimum of 25,000 cellular events were acquired.

Flow cytometry proved to be a useful platform in evaluating T and B cell apoptosis using species-specific anitbodies and Annexin V. For human, NHP and dog models, CD3 and CD21 were used to detect T and B cells, respectively. For rat, B cells were detected by gating on CD3-CD45RA+, and for mouse, B cells were detected by gating on CD3-CD45R(B220)+. Examples of the gating used to identify cells of a specific lineage, and to discriminate apoptotic from non-apoptotic cells, are shown in Figures 1A through 1E. 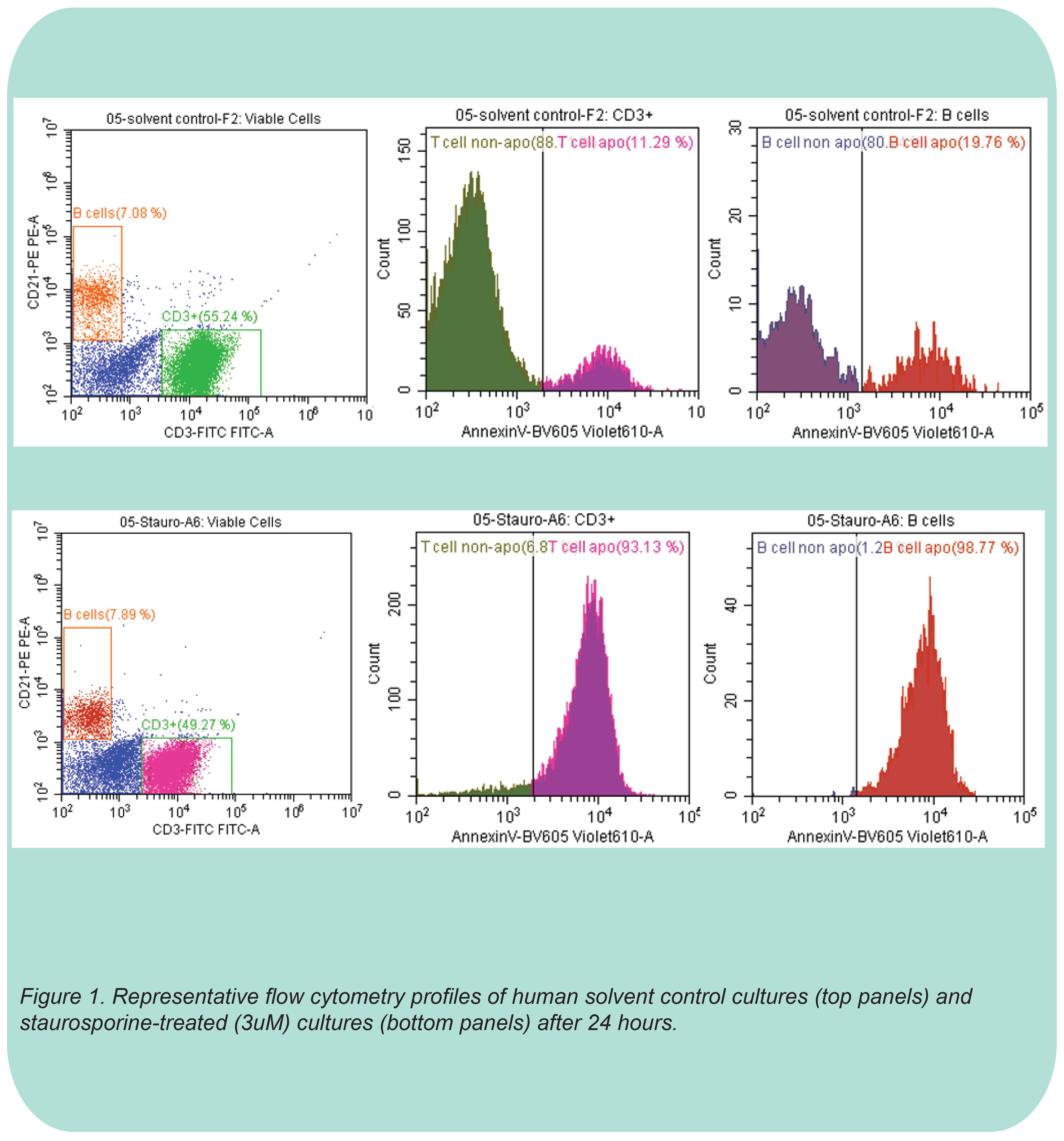 Staurosporine at 3 uM induced B and T cell apoptosis in all species.

After establishing the appropriate antibody panels, gating strategy and positive control for each species, we then compared two MAPK kinase inhibitors, Losmapimod and VX-702, for their ability to trigger apoptosis. T cell populations were not affected by Losmapimod in any species. In contrast, B cell apoptosis was detected in human and dog PBMCs only in response to Losmapimod at 10, 1 and 0.1 µM. VX-702 had no effect on T cell apoptosis in any species, but there was an increase in B cell apoptosis in both human (100, 10 and 1 µM), cyno (100 and 10 µM) and dog (1, 0.1 and 0.01 µM) PBMCs (Figure 2). 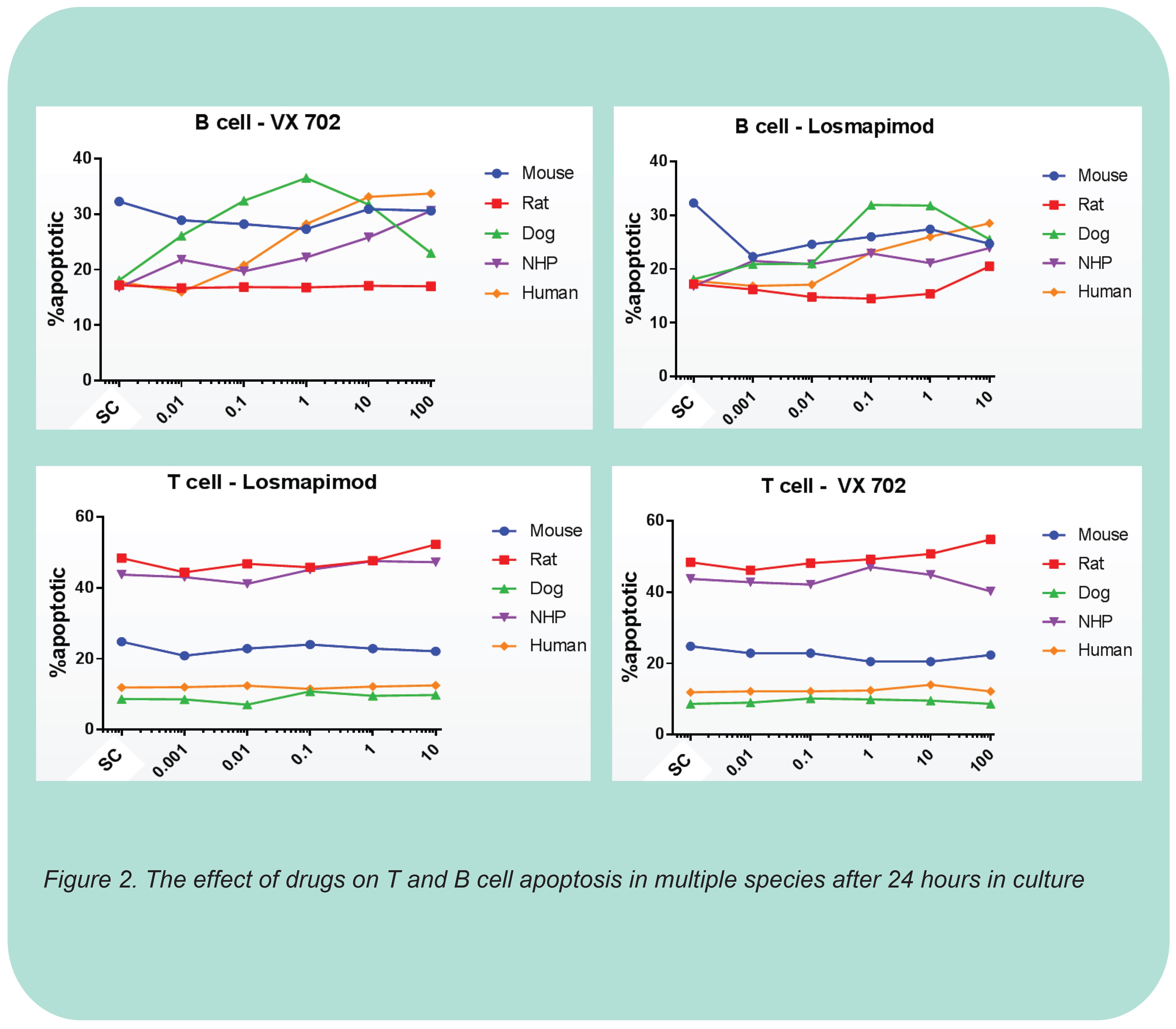 For both Losmapimod and VX-702, there was a hook effect in the dog cells indicating that this species’ cells are particularly sensitive to these compounds. Cells were frozen down from a number of fresh human, NHP, dog, rat and mouse samples and stored in the gaseous phase of liquid nitrogen. Mouse and rat cells couldn’t be processed over ficoll but were instead lysed with an ammonium chloride buffer. Consequently, viability post-thaw was greatly diminished and the baseline level of Annexin V expression was unacceptably high for use in a predictive assay (Figure 3).