Bystander Effects of Antibody Drug Conjugates on the Hematopoietic Compartment

Antibody Drug Conjugates (ADCs) represent a relatively new class of cancer therapeutics. Their design involves a tumor-specific antibody, a linker and a potent payload. In addition to the targeted killing of antigen-positive tumor cells, some ADCs appear to have significant off-target effects, causing neutropenia and thrombocytopenia, which have necessitated some clinical trials to be terminated early. However, the success of some ADCs at treating diseases has stimulated the continued research of ADCs as well as an increased ADC development. Publications by Zhao et al (2017) suggested that extracellular cleavage of the linker was responsible for cytotoxicity to differentiating neutrophils, whereas internalization of the ADCs by macropinocytosis induced thrombocytopenia. We developed a platform to assess ADCs and address the specific bystander effects of the payload.

The goal of this work was to create assays that could accurately assess off-target effects of ADCs. Unlike the standard CFC assay, where small molecule compounds are incubated with the cells in a matrix for the duration of the assay (typically 14 days with human derived cells), the binding of the antibodies to cells may be required for activity and so the assay was designed in such a way that the compounds were incubated with the cells in a liquid culture system for 72 hours prior to the transfer of the cells to the matrices for clonal growth. We elected to evaluate the effects of both Trastuzumab and Trastuzumab-vc-MMAE on the hematopoietic system, in part because Trastuzumab is known to have a great affinity for HER2, an oncogene associated with breast cancer, but which is not expressed on hematopoietic cells. Because 70% of HER2+ patients do not respond to treatment on account of resistance, antibody drug conjugates are being evaluated and we wondered if these may have deleterious effects on the hematopoietic compartment.

Both Trastuzumab and Trastuzumab-vc-MMAE were purchased from Creative Biolabs. They were incubated in X-Vivo medium containing bone marrow mononuclear cells derived from normal human donors (NorCal Biologics), NHP (nonhuman primates from SNBL) or rat femoral bone marrow cells (SNBL). The compounds were added at concentrations ranging from 30 to 0.1 µg/mL for 72 hours and then the treated cells were transferred to methylcellulose-based or collagen-based media to support the growth of erythroid (human and NHP), myeloid (human, NHP, rat) and megakaryocyte (human, NHP) progenitors. Solvent control cultures were also initiated. The cultures were set up in triplicate 35 mm dishes. Following incubation at 37o C, 5% CO2, for 7-16 days (depending on the species), the colonies were assessed and scored by trained personnel and IC50 values were determined for each species where possible.

Trastuzumab did not cause inhibition of colony growth in human, NHP or rat cultures over the concentration range tested but Trastuzumab-vc-MMAE significantly impacted progenitor proliferation in all species (Table 1 and Figure 1). Mean IC50 values are presented in Table 2 with mean IC50 values ranging from 0.5 µg/mL (human megakaryocyte progenitor) to 3.8 µg/mL (human erythroid progenitor) and from 0.9 μg/mL (NHP erythroid progenitor) to 9.6 µg/mL (NHP megakaryocyte progenitor). The rat myeloid progenitor assay was performed just once to date and it too demonstrated toxicity with Trastuzumab-vc-MMAE. This specialized primary cell based platform can evaluate differences between antibodies with and without payloads, rank lead compounds in terms of progenitor toxicity and identify differential toxicities of molecules in human and NHP systems. These assays may be of use pre-clinically for screening antibodies to identify potential off-target effects. 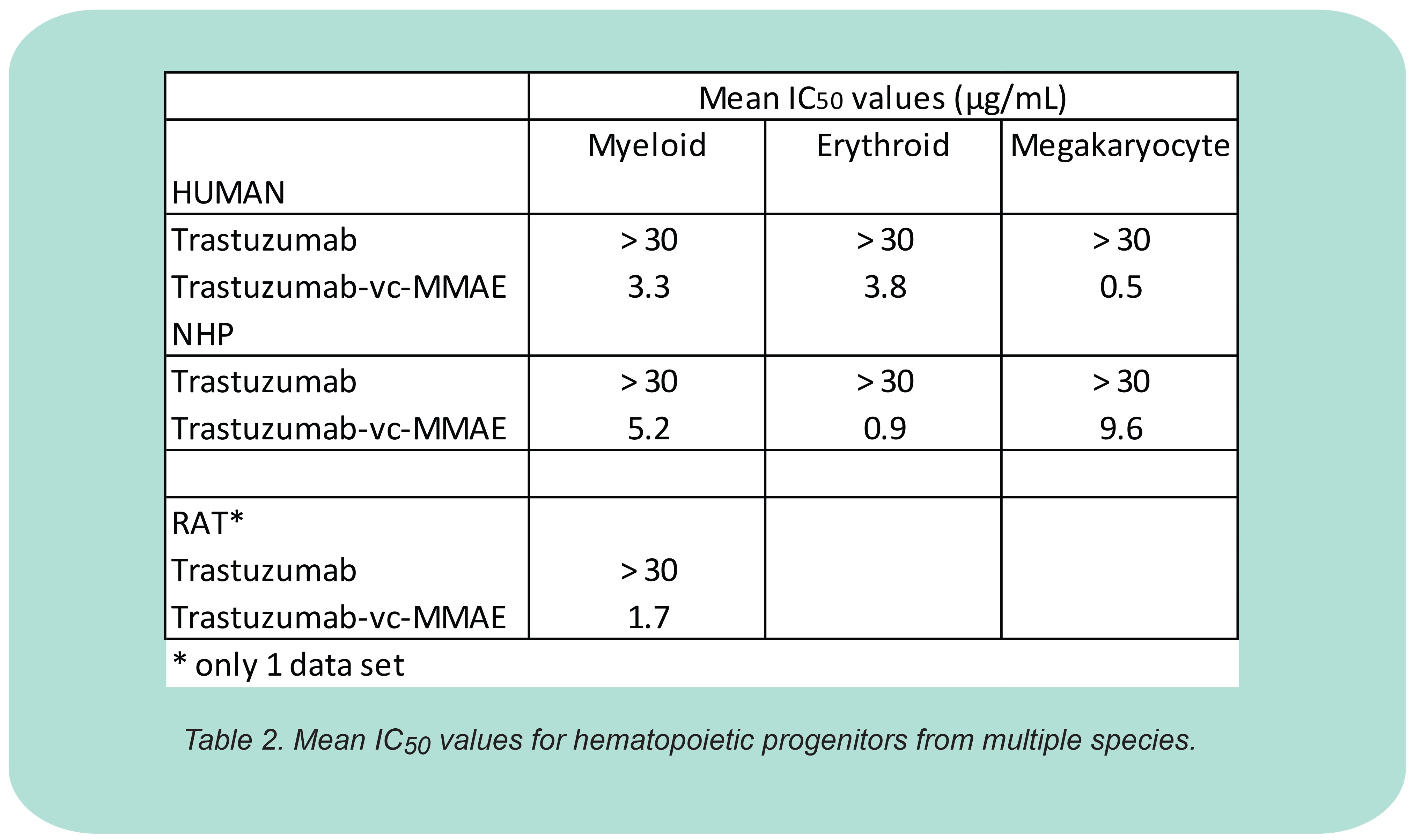 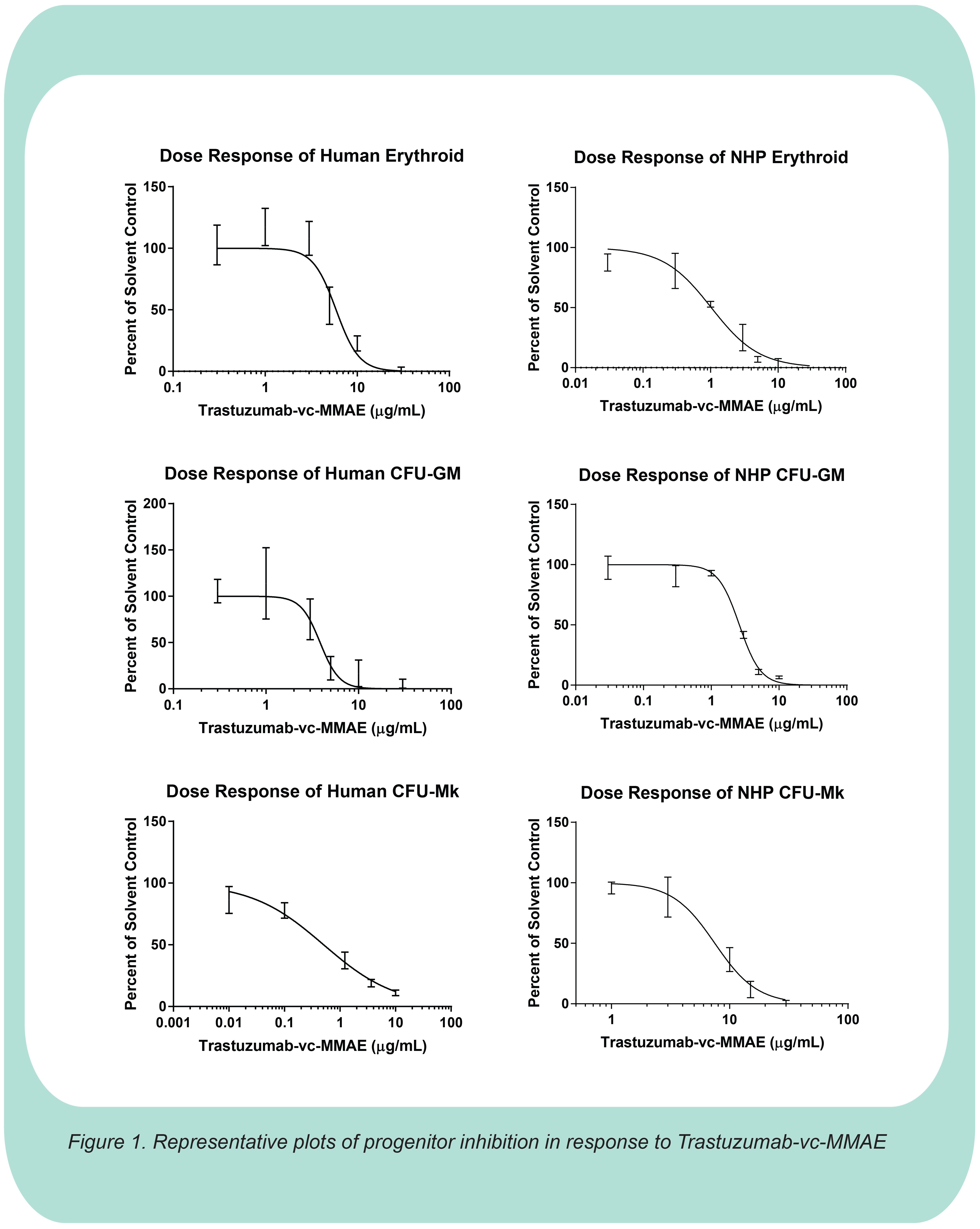